I want to begin a while back, because this road has been a long journey. This year has been more challenging, but also finally a turning point – in my art, with Spirited Bodies, and in my love life. It all happens at once, yet in stages. I get challenged about why I am sharing the personal, in an art project which is supposedly more for the benefit of others, and I respond, because when I was a younger woman I missed an older female role model, who had the appropriate life experience. I struggled with that, until things gradually fell more into place. I wouldn’t have listened to anyone who purported to understand, and I’d know if they really did. Any more privileged woman who thought she knew best, definitely didn’t. Now of course, I may be the more privileged woman for many, but I am happy to share that it hasn’t always felt thus, and if in some way my message can reach distant others, that is what was in my heart all along.

In short since late May, this year has included several frustrated attempts at connections with venues and individuals with whom I seemingly failed to build a rapport. Trans activists (who were not actually trans themselves) with whom it was impossible to have a sensible discussion about trans issues and how they intersect with the needs of cis women rape survivors in some cases. Competitive women with similar projects to mine, who either viewed me with suspicion, or just thought they knew better. Community collectives who were not open enough to host Spirited Bodies! What could be more appropriate for a community…?

Earlier in the Summer I met Sarah Kent at Brockley Open Studios, in my neighbourhood. We got chatting in artist Gill Hickman’s studio, and something resonated. I attended Sarah’s soundbath and experienced the healing sounds on the floor of her living room. I felt at ease with her, as well as moved by the intense yet soothing vibes. She said expect changes in the next few days, and ideally make space for them.

What I hadn’t known was that my old friend Michael, had died that day or the day before… and I found out a few hours after the soundbath. Michael’s death, for me marked a turning point, a shift of focus. In the middle of Summer this news penetrated layers of the fabric of my being. It took me back to the late 90s when I knew him best, the times and the company we shared. Though I had not been so in touch with Michael in recent years, his strong uncompromising world view sank into me as I relooked at the world through his imagined eyes and the filtered lens of the girl I used to be. Somehow both introvert and extrovert, rebellious, even fearless. The power of youth! While most of us had mellowed, to be fair including Michael in his own minor way, really he had sustained a strikingly similar mentality to what we all remembered. I instantly felt tougher, unaffected by petty crises previously around me. For a while I was invincible! Untouchable. I thought of Michael a lot.

With Michael (centre) and friends at an anti-criminal justice bill demo, mid 90s

My erstwhile longterm relationship that had been faltering, now felt briefly healing again. My partner, connected to the old tribe including Michael, understood intimately my feelings, but the ending of our relationship was imminent. We had drifted apart, and I craved cohesion in my life. A nervous breakdown at one of my modelling jobs alerted me that something had to give. I could not visualise a future that felt fitting, under my current circumstances. The breakdown involved intense feelings of being violated by the artists sculpting me, when in fact I was also aware that neither they nor the tutor (who is one of my favourites) was responsible. The conditions of my life were so disadvantaging me, that I could not see light in my routine. To make a success of my art projects I needed all energies and people in my life to point decidedly the same way, otherwise it was dissipating. I needed freedom. We technically had an open relationship, so when I did find closeness with a new partner, it took me a little while to realise that I could not be so intimate with two men simultaneously. The new relationship rapidly came to mean so much more to me than I could have anticipated. So intense is this new connection that it felt prudent to break up with Aaron. Simple is better; and freshly blossoming love deserves the richest, most fertile ground in which to take root.

In my new partner I found a fellow life model and writer, as well as an enthusiast of all my projects, sharing much passion in nude art adventures, and travel, something I had missed in the past. I also found so much love I hadn’t dreamed of, expected, in one with apparently such different background. His openness, sensitivity, intelligence and understanding take my breath away. As the Autumn took hold, this new excitement grew, and grows. I am in love.

Spirited Bodies again feels in a good place. I have resolved some issues, and feel confident about the involvement of men modelling again. For Spirited Sound I didn’t take any chances with male models. I knew all of the chosen ones personally and felt 100% safe with them. With the help of my partner and other trusted male models, we are creating an exceedingly safe space for everyone. That’s not to exclude the trusted women models from this equation, or the artists, but it was mainly an issue with deceptively inappropriate male models, so feels apt to be solved first, by male models.

All artwork from Spirited Sound, 8/11/15, at the Bargehouse, Oxo Building, Southbank

The healing power of Spirited Bodies is very important to me. I have explored this a few ways; in more intimate workshops, through interviewing models (and artists) about their experience and playing their recorded voices during sessions. Now with Spirited Sound, a new, more direct, less personal but more universal model has been born. The sound instantly seemed to free up the format, necessarily instigating greater experimentation. Traditional life drawing standards according to the wants of some artists are thrown out. This is all about the Spirited Bodies, and this time we tried some movement poses which was a beautiful way to discover even greater harmony as a group. Three minutes of very slowly opening up from a closed posture into something more expansive, and five minutes of flickering gently together, moving as flames of a fire burning brighter and closer. 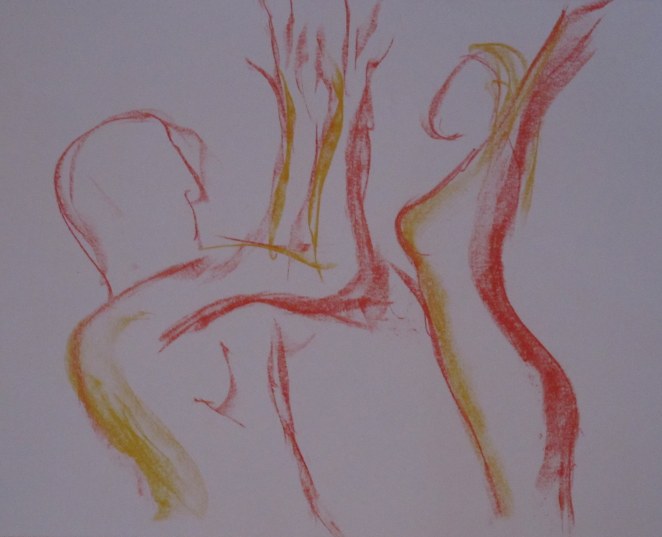 The session was divided into 4 sections, each representing an element – Fire, Air, Water and Earth. Shorter and movement poses in the first 2 parts, then longer poses for Water and Earth. The models connected with each other when they felt drawn to, as they collectively expressed themselves elementally. Dynamic and expansive for Fire, including a slightly longer Scene from Hell – the fallen among the devils. Light and floaty for Air, as well as being blown together in a very strong gust of wind. Flowing waves for Water where the models lay variously in a row, some interconnecting; and pure grounded connection for Earth, each model occupying their own comfortable (I hope!) space. It was a big pleasure to work with the group of models, several I have gotten to know over time with Spirited Bodies, including professionals who enjoy the deepening experience a lot. They create a warm atmosphere for any newcomer.

5 minutes blowing in the wind 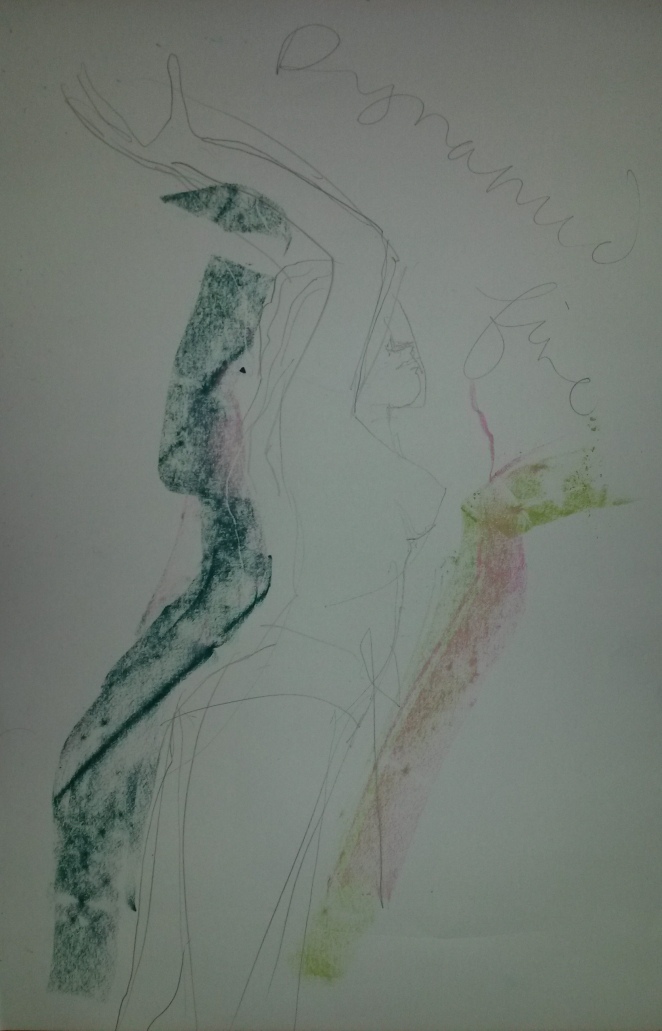 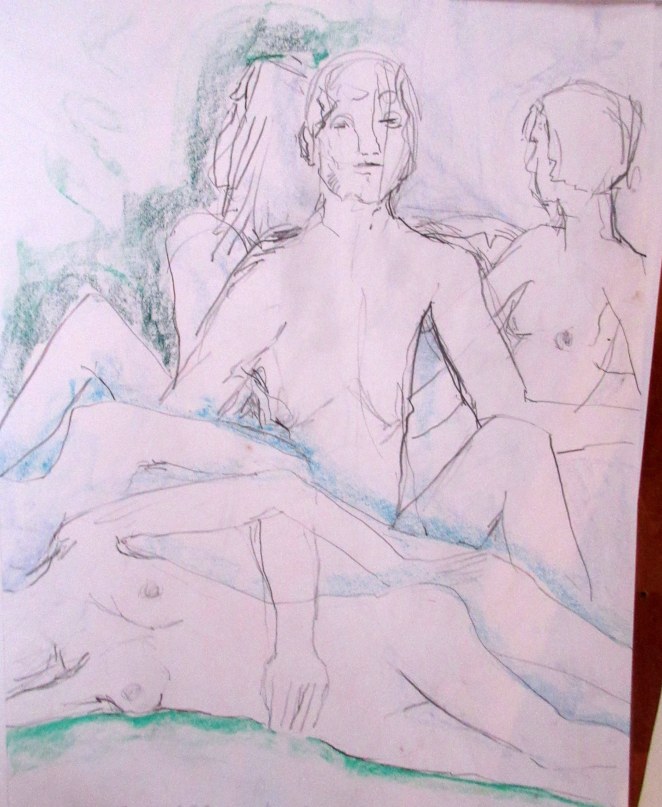 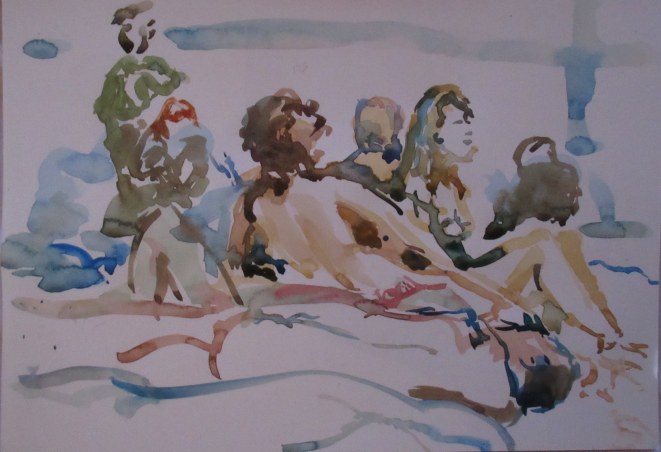 Spirited Sound happened because I had connected with Sarah, and she was interested and happy to bring her sound art to Spirited Bodies. It was her idea to work with the elements as a theme, and she created sounds to fit each mood, to accompany and inspire the models (and artists), and weave a layer of vibrational texture into the space. There were bells, singing bowls (including one large one containing water), large gongs, a rainstick, a jingly instrument which when shaken lightly produces an array of gently tingling bell sounds of different notes.

Spirited Bodies becomes something more layered with the inclusion of sound art; another type of art is intersecting with the life modelling and drawing. A new relationship emerges between musician and models (and artists). Is the sound influencing the models, or vice versa? A bit of an exchange for sure. At one end of the room Sarah laid out her instruments, from where she could see all the action (and stillness) of the models. Had we been in the larger attic space as originally planned, she may have arranged herself in more spread out fashion around the room in order to move about and be among artists and models, so that sounds would emerge from different areas and directions, possibly moving too. Sarah and her instruments could have been linked to the visual aspect of the artists’ attention, perhaps appearing in the art, as positioned within the scenes of poses. The attic also had a particular atmosphere which would have lent itself well to the gravitas of gongs, however it turned out that heating and lighting that space was a task beyond the electricity supply. It was great as it was, but it would also have been fantastic for Sarah to have been slightly more integrated with artists and models. Nevertheless, her presence and sound creation were deeply felt and appreciated by all. This was a joyful collaboration which I hope we may explore again.

I feel more comfortable with the trans inclusion (to women’s sessions) now. This is very delicate, but it’s important to be open. I sometimes feel that a separate group for women only – excluding non-transitioned trans women – will be helpful (particularly for cis women rape survivors, of whom there are probably more than the entire population of non-transitioned trans women). I will tread carefully. One thought is that, if women’s events are open to all trans women regardless of transition, that gesture is what is important. Possibly those trans women themselves are not interested to come along, and may well realise that their inclusion can be tricky; without wanting to be divisive, there are very different needs at play.

The issue of competitive women is being resolved too. I am not taking this personally, but see it as symptomatic of us women, learning how to share our power. This might seem odd to be so gendered, but I do think we are not so familiar as men are, with having power in the first place, and often if we do, we are encouraged to beat off the competition. This doesn’t make sense when our projects are about liberation and empowerment, for all, not just some elite. These higher principles must filter through otherwise projects will die. 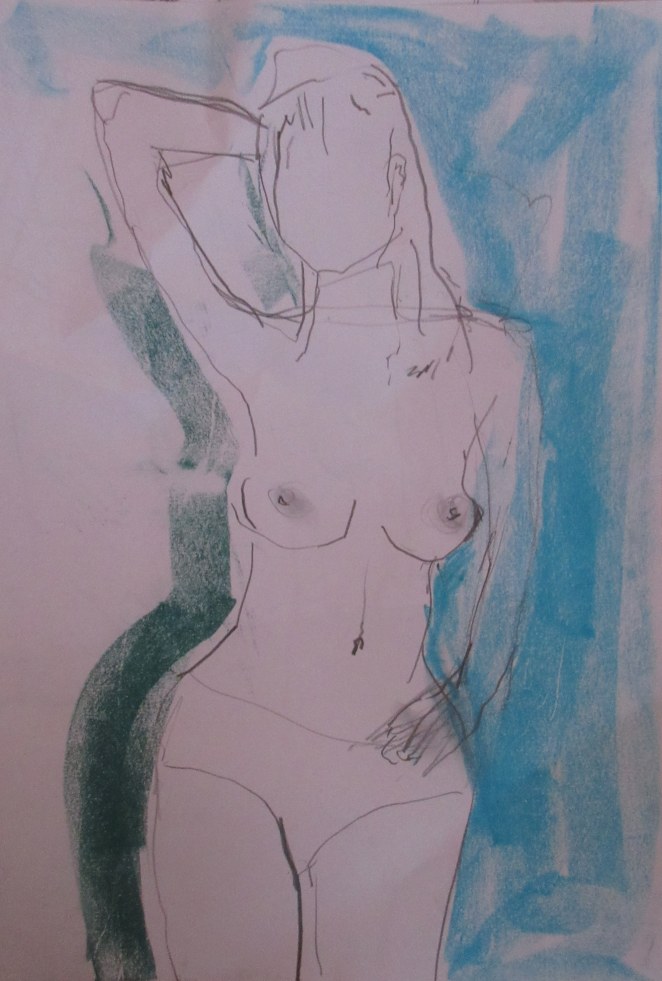 Leaving you with a few more pictures of artwork from Spirited Sound. We were very fortunate to have a lovely photographer with us at the event too, so there will be photos of the group of models to follow at some stage. Also, I am just planning an event for December, so keep looking out! And a blog post about the women’s event at Bargehouse will also come soon. 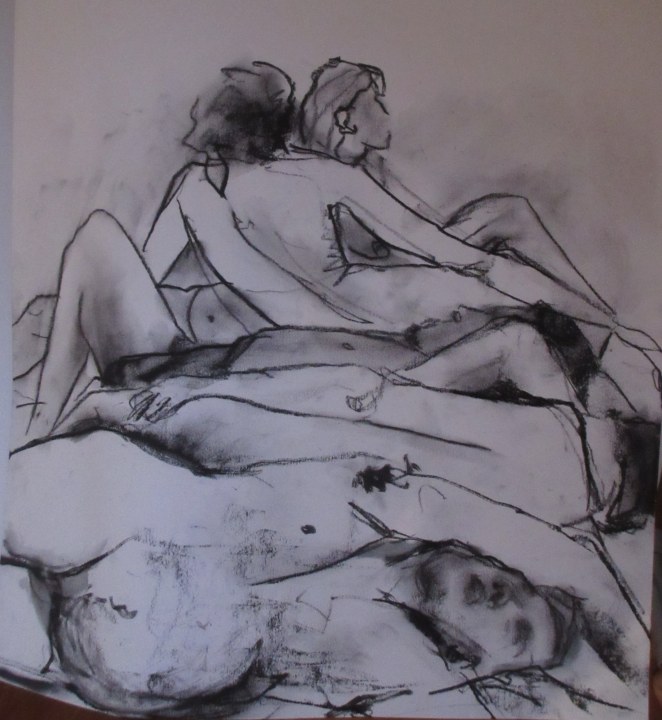 With much gratitude to all the models, artists, and Sarah, as well as Kathy, Angie and Jenny from the Southbank Festival of Creativity at the Bargehouse