I was grateful for a good year, and ready for a rest. The rest came early when complications arose with the final event so it was cancelled. During the two weeks preceding my holiday in Spain I raised my voice to artists drawing me on two separate occasions. The holiday was well overdue! It was the continual objectliness of the role of life model, being referred to not as a person, but as their (the artists’) object, so that they could get their picture how they wanted it. I cannot remain passive, and at this point in the term, my level of politeness was challenged also. The part of me that has missed making theatre rose up spying an opportunity for a natural drama. My voice shifted to histrionic tones, without quite shouting I did project! I let them know I am much more than an object and they ought to honour my presence, for without me, they would not have a model. They may have many other models, but right here and now, they have me, with the shape and form that I am. If I need to alter the pose because I have damaged my shoulder in the position it was in (whilst doing the pose), then that is what I will do. No questions. And if I know which poses my body can make on a Monday evening at the end of a term when I have been modelling almost every day, and I am a professional model and have been for 7 years, then I know. Not them, however long they have been drawing for, does not make them master of my body ever. They may have trained in the ’50s or ’60s when the model really was often regarded as little more than an object – and when I say model, you can place ‘woman’ in that sentence in most contexts, especially for the type of antiquated artist I refer to – but we are now in the 21st Century. Get with it. Or get lost I say, because I will not tolerate this.

I returned to Barcelona where I had lived briefly 10 years ago, only this time my home was 5 minutes from the sea. Each morning I walked to the beach, and most days the sun shone very bright, the sky brilliantly blue even if the temperature fairly cool. I did not have internet and barely used my phone. I noticed the quality of my sleep improve, as well as my breathing. I kept a journal – hand written – meticulously. I unpicked thoughts over and over, and lingered on memories of my old self bumbling around the city a decade ago in a cloud of hashish smoke. Nice to feel the changes. It felt like a pilgrimage as I revisited favourite spots, and remembered the particular state of play in 2003. My sister visiting me, spending time with my classmates which helped to prep her for the audition to drama school. She got in, and we spent a year living together while we studied at the same college, reconnecting since I had left home. The massive anti-war demonstration which was the biggest of its kind around the world, must have been all the more satisfying for the leaders who ignored it to feel their supreme power. I had gone with my flatmates all day in the packed streets of the centre, then watched the next day as scenes from every city everywhere doing the same thing were shown on television. You can raise a massive outcry like that and know that you are all doing it, feeling it, but you cannot sway the powers that be, the way things are. Stupid white men Bush, Blair and Aznar were the butt of our jokes but who had the last laugh? Well war one place or another continues. To rise above that we have some way to go.

This holiday felt like the greatest gift, and it came via a friend who offered me a room in her tranquil apartment. I knew I never wanted to return to the way Spirited Bodies had been, but at some point I would take the best of what it had been and develop that. It felt like SB had drifted too far from its core. I had let other people’s wishes take over, and now I was pulling my baby back. I longed to reignite my creativity apart from this direction too, so that drive will be honoured from now on.

I came in touch with a female shaman (shamanka) at the beginning of 2014 and with her transcendental insight she had strong advice for me (she gave me a good telling off!) Not to let others take over ever again. Keep nursing this child of mine as it is a calling and to be given the utmost care. I didn’t skip school, waste my youth in mindless chemical abuse, sell my body and give up all pretensions of wanting a ‘normal’ life, mortgage, academic success and 2.4 children to let people who had some of these things take over. Moreover my grand parents and great grand parents did not give up promising careers in the West to live and work underground in the impoverished East or start the South African communist party, in order that their bloodline would give up the fight for justice. Because when you have made big decisions about your future that mark you forever like an alien, you have the power to change things, but only if you use it. It is a unique and divine power and it comes from the passion of youth. You never knew as well as you did when you were 16, 18 pounding the beats on the dancefloor what was wrong with the world, and also what felt right.

It would be vital for me to nurture my own sacred masculine who had gotten lost amidst my celebration of the feminine. That would help me to avoid leaning on others or being led by them. The shamanka pointed out my inappropriate openness left me vulnerable to others hoping to make money, further a career or even meet women through SB, which ultimately was at my expense, undermining my efforts. The good news is, I feel in such a place now, that there is no turning back; I exhausted other pathways. I am left figuring out the direction for myself and have faith in the perfect unfolding of this beautiful phenomenon, with a bit more experience behind me. In the beginning there were so many questions that I was grappling with – whether to have men model with women, whether to make events more theatrical, whether to organise every element of an event myself or combine with organisations of artists, whether to target ‘vulnerable’ women or to create a financially viable operation aimed at wealthier women, whether to stay attuned to the shamanistic 5 Rhythms community or go more political with the women at Southbank, whether to include professional models or create a franchise. I know a lot more now where my heart wants to go with this, and experience has taught me much about what keeps the essence pure.

I aim to bring Spirited Bodies to the Southbank Centre on Sunday March 9th as part of Women of the World festival, late in the afternoon. This will be more of an installation rather than last year’s presentation. It will be a women only space, where women who have modelled with us before will lead the way, before newcomers are welcome to give modelling a try as well. I will invite the experienced women to read out testimonies from women who may prefer not to tell their own story or cannot be there, though live accounts of the transformational experience of life modelling are also welcome. As a healing space for women, it will be totally cool to simply be present, sit on a cushion and listen. Naturally I would love lots of women to come and draw as well as model, but you are also welcome to just be there. Please get in touch if you think you would like to take part; for the most part a day ticket to the festival will be necessary (£12), but if you have modelled with us before I would like to offer free entry to our session at least.

Apart from this my energies are going into a one woman show I am creating, ‘Girl in Suitcase’, which will first be aired in late March (28th) in South East London as part of the Telegraph Hill Festival. It is a follow on from the two woman show I put on in Edinburgh 2011, though now I have decided to simplify matters and concentrate on one performer – myself. Well one performer plus one or more live musicians accompanying me. I will likely start a new website for the show which may provide a new outlet for my more personal ramblings, allowing Spirited Bodies to be entirely for itself and the participants’ stories.

Bringing me right out of the womb will be One Billion Rising for Justice on Valentines’ Day (V or Vagina Day), Friday 14th February. I am simply going to link to Facebook as all the blurb is there – https://www.facebook.com/events/1445985895616396/. Basically Eve Ensler, creator of ‘The Vagina Monologues’ and a healing city for women in the rape capital of the world, Democratic Republic of Congo – leads a host of prominent feminists from MP Stella Creasy, QC Helena Kennedy, actress Thandie Newton, performance artist Skin and many others in campaigning to end all violence against all women everywhere (one billion women in the world it is estimated will be raped or beaten in their lifetimes). Between 12 and 2pm in London, Trafalgar Square there will be speeches, performances and dancing. But wherever you may be in the world, there may be an event near you, or you can start your own. A ‘One Billion Rising’ panel discussion at the start of January got my feminist senses buzzing again, and most of the room dancing by the end; it was electrifying. Hosted by Jude Kelly of Southbank Centre and much of the WOW team, it really helps get the momentum going for V Day. Returning to the idea of balance however, The Southbank this weekend is holding a festival to honour men, Being a Man.

That’s all for now, look forward to crossing paths in the upcoming Year of the Horse.

a Barcelona beach in December 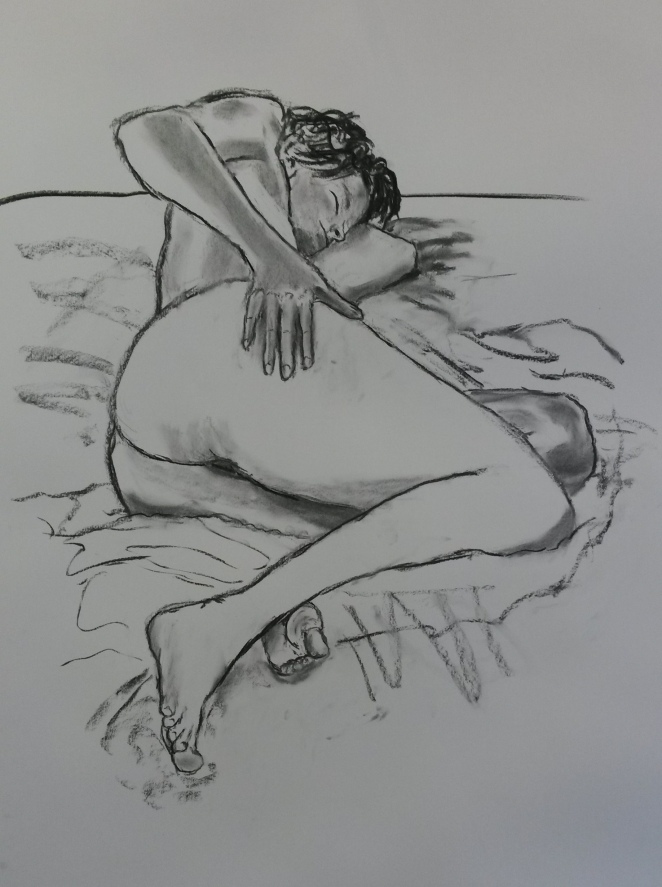 sleeping on the job 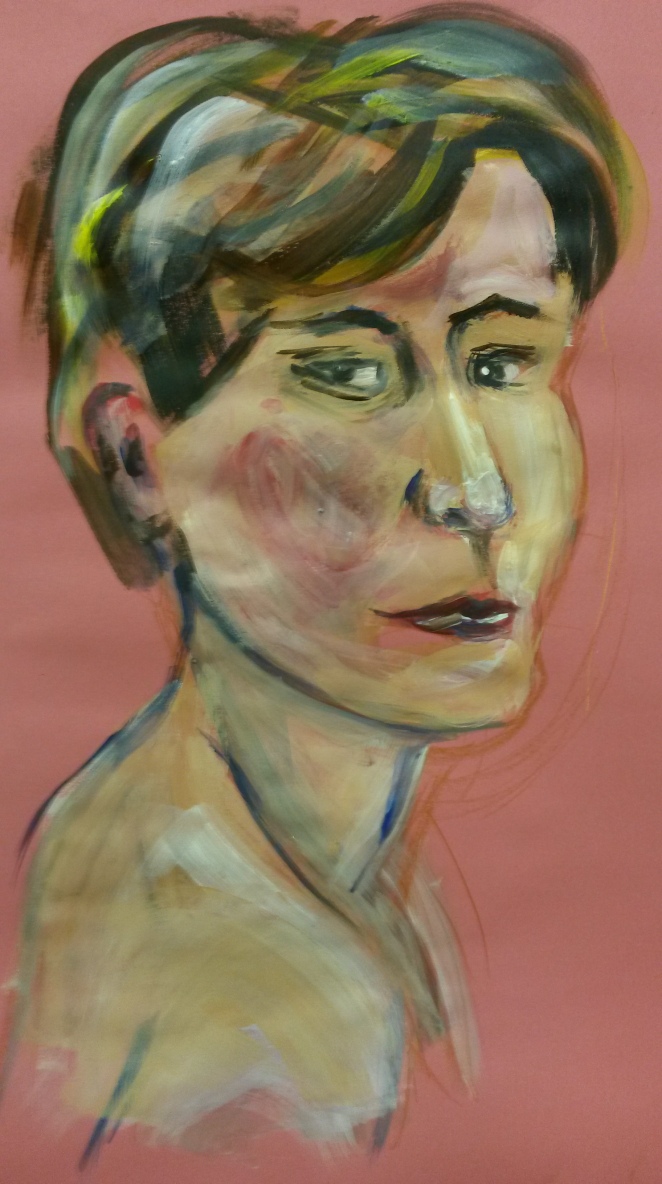 She has been evolving her Girl in Suitcase performance since 2009, most recently exploring the life cycle of woman and reclaiming menstrual rites.

In 2010 she created Spirited Bodies to provide a platform for women to try life modelling in a safe environment, and gain a new sense of embodiment.