A week to go before Girl in Suitcase comes to The Hampstead School of Art. I have rewritten quite a lot to keep it fresh. I know what needs to be junked or rewritten when I am trying to re-learn the lines. If a scene doesn’t feel right, I just don’t want to learn it. I have to get a kick out of each scene. There has to be some sort of continuity, though the show is fairly abstract, playing around with time, me shifting between 2 different characters, which sometimes could be and are the same person. That’s cool. They are Mother and daughter, and as you get older you start to realise, you are becoming your parents whether you like it or not!

The musicians will take on the whole score this time, no recorded music. So I had to get clearer about exactly which lines they were coming in on with which instruments. It’s not easy getting 5 pretty disparate people together to rehearse so time together is very precious. Learning how to think as a conductor or composer is a bit radical for me, being able to articulate what I want from them, but the art of working together is appreciated. It could just be me and my sound system (and at some point it might be) but sharing this process with others helps to get me out of my head!

The writing is something I usually do alone, though there are certain people who deeply inspire me. I take notes whilst in the company of my very good friend Szilvi. She knows me so well and has long been a creative partner of mine. There is this fire in her, I’m not sure if it’s because she’s a Leo or it’s the Hungarian in her, but she describes her pain or her excitement with such delicious colour. Some lines in the play are just plain Szilvi! I rock up at hers on the way home from work on a day when I’ve been totally blocked, and within minutes my notebook is out, trying to keep up with her dynamic spiel. I love that woman.

Then there’s Mum whom the play is actually largely about. That’s hard as feeling too emotional about the content inhibits my ability to engage with it or play with it. Hence Szilvi. Between the two of them I access most of the ideas. In the way that only someone who knows you deeply really can, Szilvi will tell me straight what I need to do. She’s not afraid of upsetting me and she has a fabulous instinct for drama. She doesn’t so much suggest an idea as perform it for me. Of course if she was available I’d invite her to perform, but we are not sharing that particular path for the time being.

My boyfriend Aaron listens to a lot of scenes and feeds back. He loves good writing, usually on television, or science fiction, and has an ear for what works or how I might adjust something.

I’m posting some pictures from a session I was modelling at this evening because I like them so much (they don’t really have anything to do with the show except they are life drawings with me in them!) I was asked to bring in black stockings and high heals. Well it was liberating. I’m quite a lazy girl in general on the girl front, I mean dressing up. Now and again I go for it, but being asked to wear heals, and not to walk in, just pose, was awesome! I could feel the temperature going up in the room! Stockings too, it all got a bit Toulouse Lautrec. Some very pretty artwork so that’s why I’m posting. I tell you, it’s a whole different set of muscles to negotiate in stilettoes, and they don’t get out of my bedroom enough. It felt a little erotic, though actually the poses are very similar to what I would normally do. Just adding some simple French brothel parafernalia makes all the difference. Loosened me right up, it was a nice gift just as the midsummer full moon approaches. 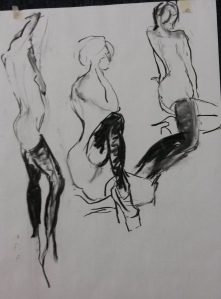 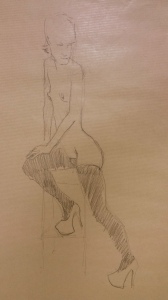 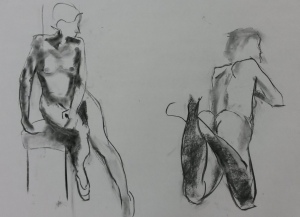 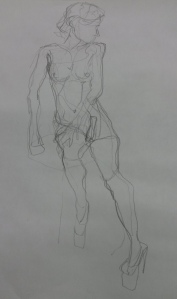