What Drives me towards my Goals, & the Healing Hands of Alessandra Malaspinal

My nigh on 5 month relationship with my boyfriend has allowed me to uncover many depths. It is his strong connection with my formative years that has fast-tracked our lurve and understanding. He seems to possess qualities which enable me to heal and flourish, and somehow I am filling in some sorely missed gaps for him too.

The other day, I realised I had spent too much time at his place, in his neighbourhood, which does necessarily bring back a few memories for me. I got angry and regretted it afterwards, but what I had spewed up did reveal to me so clearly what drives me.

He has unique capabilities in maintaining strong, solid friendships with some significant exes, and just all round good relations with several women in his life. He overall prefers the company of women, expressing the unlikely line that ‘they make more sense’! What I observe is that they trust him, don’t feel remotely inappropriately bothered by him. They can talk to him the way they might another woman, only any competitiveness is ruled out. Similar to the way gay men often make excellent female company.

Sometimes I find this state of affairs testing, though I also know that I may reap the best benefits from it. It can feel like they may have a tighter hold on him, rousing my jealousy, though it’s not the case. More that I am still a bit unused to this dynamic, and to sharing him thus. I am aware that he is protected, loved, by several women who adore him; what a way to keep me in line!

My own history of being far too involved with one man in my life and not having enough time for friends, is thrown into sharp relief. I want to open up now to have more close friends, and for the first time in a long time, to bring my friends towards knowing each other.

So what I realised when I had a recent outburst, is I had left a group of old friends over a decade ago, because I hadn’t been able to process and talk about my negative experiences with anyone around, save the man in my life at the time. What was troubling me inside I did not feel I could share with any of the other mates, where light-hearted banter was the norm. At least, I did not find the right outlet with anyone else, so my boyfriend bore the brunt. When that relationship ended, I had no emotional means to maintain active friendships within the group. I found a new boyfriend, and migrated socially, in a way repeating the same experience. This migration pattern occurred twice; each new relationship lasting around 5 years. By the end I was quite lonely, yet recently through Spirited Bodies I gained confidence, and felt ready to get back in touch with some old friends of my youth. Indeed, an astrological reading from over a year before had mentioned that I needed to ‘find’ my friendship group, as I was far too lonely! I had knocked on a few doors I suppose, but nothing felt right until I went back to the old ones. That is to say that completing a circular journey which brought me home to old friends, has also allowed newer friendships to acquire more grounded substance.

With my boyfriend now, I was jealous, of other women who took his and other platonic friendship for granted, which I struggle with. I bitched that they hadn’t been there for me all those years ago. It’s irrelevant now. How many friends was I not there for when I was too young to know any better? What does make sense is that my relative loneliness drove me forwards to create something new, as well as to reach out to others in a gesture of inclusivity. When I heard a friend complaining of a woman she did not like, who some years ago had been violent towards her and is part of a larger group of friends, in fact accepted by some of her friends, I found myself wanting to give the woman a chance – never having met her I could not judge her. Who knew why she had been in the bad place my friend had had the mischance to encounter? Particularly women I want to be ready to listen to. This woman may not be as privileged as some of the female friends that my friend is accustomed to. Privilege here refers not only to wealth, but also access to loving support.

What the above does omit is all sorts of other reasons I wandered into a wilderness; like needing a new lifestyle, and the recognition that slowly I would be harmonising relations with my biological family, and that that would have to happen before I could sort anything else out. I am far from alone in taking a meandering path. What drives me comes from earlier origins too, naturally.

This propensity towards the long-term relationship just seems to attract more of the same. Despite all sorts of unfavourable conditions, I see now how the LTR has stood me in good stead. I have a nose for them; my support networks have not before been set up to cope with the single life. I work to redress that imbalance now, not in order to be single, but so that my relationship may last longer and grow richer.

Hardwired in me is a 7th sense for a sustained, engaging and emotional relationship. I don’t even think about it – my body tells me where to go. I volunteered to pose naked for my present boyfriend before I even knew why! My mind created other motives which weren’t without content… then I stopped eating and sleeping a while… girlfriends warned me at first fearing some danger, then later when my concentration failed to return from the ether, they told me to go to him.

Once the connection has been established, I am confident – even after a honeymoon may have dipped, that I can work through whatever I have to so that love builds, a snowball gathering momentum! Of course finding the right man to do that with is what keeps this blessing buzzing. 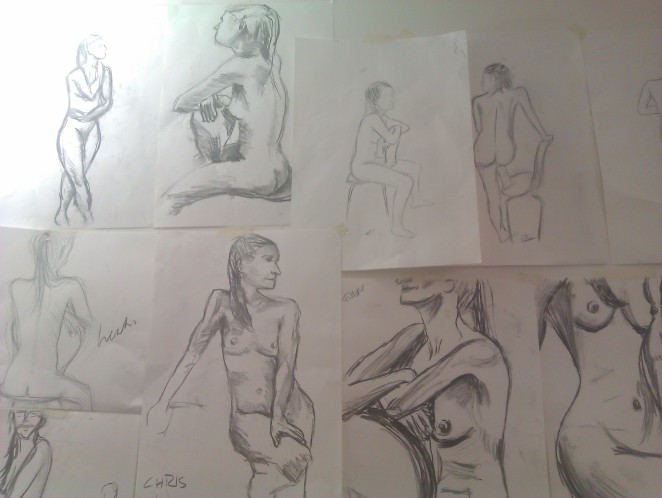 an advertising agency pays for its employees to learn to draw

A friend who took part in Spirited Bodies 2, Julia, brought a friend with her.  Alessandra took well to modelling and found it liberating as a woman approaching middle age. It brought out some of her natural vivaciousness and she did excel. Sadly the reality is that a woman her age is less likely to be booked than me, I mean she would likely have to go the extra mile to promote herself. Unless you are blessed with some unique physical feature, more averagely shaped women are less likely to get work as they age. I have learnt this through the SB project, and now hold off informing would-be models that work is guaranteed. I am a slim, bendy physical theatre performer who can stand on one leg for 15 minutes. Being in my mid 30s is not a problem. It might be for another woman.

Thankfully Alessandra has many talents, and one she is developing is the skill of transmitting energy to others by healing with reiki. Since meeting each other she has been practising on me, and on occasion I have taken the opportunity to draw her. It has been a fantastic way to get to know her. While I lie down, eyes closed, she holds hands above me, or sometimes lightly touching my skin. I feel warm, tingly sensations and relish a chance to concentrate on breathing. I let go of tension and appreciate her time immensely.

2 thoughts on “What Drives me towards my Goals, & the Healing Hands of Alessandra Malaspinal”