A Feminist Uprising in Brockley!

The coolest thing just happened to me. I had been indoors much of the day working from home when I felt my antennae twitching. It wasn’t just the coffee. Thought I’d go stock up on fruit so took a walk in the warm evening.

I got some grapes and plums etc and was meandering back when I bumped into a woman I met last week when I joined up with fellow Lewisham residents who are part of 38 Degrees Campaign group. We had handed in a petition to our MP against plans by government to spy/collect more data on people’s internet use.

So we were chatting about her involvement in a charity supporting refugees in Lewisham, and about my naked events being tricky for some ethnic/religious groups when I saw a woman waving at me from across the way. I told Heather, my companion and she turned and recognised a friend of hers. We joined her in the little park by the street; she was sitting as she had a bad leg. This woman had a slow, lilting Scottish voice and a warmth which seemed to operate on a different time. She described the old ways with affection, when children played outside and books had pages. I recognised her at once for an artist with her care and pleasure to tell me what she valued. It was not a rant, more a musical aside; you might lean in to catch. Someone with a vision and a smile.

I wanted to stay in touch and as I took her details she mentioned an impromptu meeting of women locally coming up soon, they would take over a pub! She said she used to organise regular feminist gatherings in the 80s but had not done so since having children. This will be the first reunion of her womenfolk friends and some new ones for nearly 30 years! I was astounded and felt the serendipity so sweetly. I was/am looking for women. I want to bring back the sense of empowering women to my events. I not long ago removed the ‘Empowering Women Through Art’ tagline as men are blatantly invited too. However since this change I have stopped hearing from women so much but instead have a regular influx of inquiries from men. I want the men; it is important to have them, for themselves and for the women. But my first passion is the women. Men sometimes asked ‘why do women need empowering? – Are they weak?’ The answer is sometimes unfortunately yes. You might not be able to see it but I feel it. I also know that women are increasing in their power as I write; their energy is on the up.

While a few white men basically control the planet’s finances, I think it is safe to say what may be a cliche that women and coloured people and every other minority/alternative do not yet enjoy equality. There is I believe another way to do things… and 38 Degrees represent just that – People, Power & Change. Our MP Joan Ruddock argued that policing the internet is vital for catching evil criminals particularly from the porn industry. There may be much abuse in that area and I could not say I know the facts (who can?) but our society (globally) as we presently exist keeps sex as something which still has taboo about it. The idea of tackling crime by targetting ‘criminals’ is akin to treating disease by symptoms. It is a way to manage things, though I think short-sighted. In a better world, we may look deeper at our beliefs which allow the negative manifestations of crime and disease to function. Work in progress. 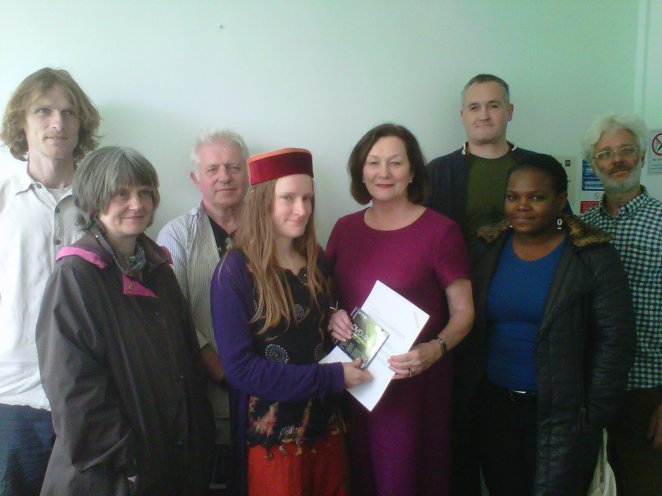 3 thoughts on “A Feminist Uprising in Brockley!”